Improving life for patients with neuropsychiatric diseases through a fast and efficient screening and assessment and an accurate monitoring of the treatment based on objective data.

AQT is a usable test for dementia assessments in primary care. Sensitivity for AQT is superior to CDT, equivalent to MMSE, and comparable to the combination MMSE and CDT. MMSE in combination with AQT improves sensitivity. Because AQT is user-friendly and quickly administered, it could be applicable for primary care settings.

AQT was twice as sensitive as the MMSE in detecting treatment response to AChEI in patients with AD.

In conclusion, this test allows, due to the measurement of cognitive processing speed, the detection of cognitive impairment at its very early stages, promoting an early diagnosis of neurodegenerative processes in the aging process.

A Quick Test of Cognitive Speed is an objective, reliable and standardized screening and monitoring tool for the assessment and treatment of Alzheimer’s Disease, Lewy Bodies Dementia and Parkinson’s Disease Dementia.

Preliminary studies also suggest that AQT can be used for screening and monitoring other neuropsychiatric conditions, in particular ADHD. (19, 29)

The test has high sensitivity and can detect cognitive impairment, even at a very early stage.

In contrast to a test like MMSE, AQT has no ceiling and can monitor changes accurately for patients with both mild and severe cognitive impairment.

The name AQT derives from two aspects of the test: That it measures the cognitive speed of fundamental executive functions as attention, working memory, set shifting and cognitive control, and that the 3 tasks of the version of the test for clinical practice can be performed quickly – generally in less than 3 minutes.

AQT results are not influenced by gender, socio-cultural background or years of education after grade 8, and naming times increase minimally with age, about 1 sec. per decade in normal adults.(3)

Test-retest reliability
The test results are highly reliable with test-retest correlations (r) of .91 for color, .92 for form, and .95 for color-form naming and there is no evidence of learning.

AQT – at a glance 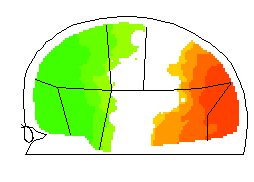 AQT will be available for international shipping soon.

You are welcome to register your mail address here, and then we will inform you when the test is available for ordering.

AQT Assessment ApS is a Danish company, but with strong ties to scientific communities in Sweden, Spain, Greece, Italy and USA were many of the clinical studies behind “A Quick Test of Cognitive Speed” have been realized.

It is the mission of the company to help practitioners in their effort to improve life for patients with neuropsychiatric diseases through a fast and efficient screening and assessment and an accurate monitoring of the treatment based on objective data.